It is believed that Lord Rama killed 10-headed ungodly Ravana on the day of Dashami. Not only this, on this day, Mother Durga killed a demon named Mahishasura and freed the gods from her terror.

Dussehra or Vijayadashami is celebrated on the 10th day after the nine days of Navratri as a celebration of the victory of the nine powers.

How to celebrate Dussehra or Vijayadashami 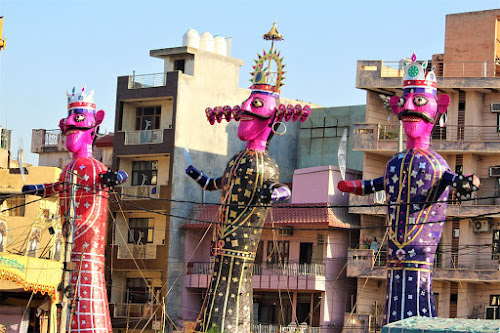 On the day of Dussehra, effigies of Ravana and his brother are burnt with great joy. Navaratri festival is also concluded with Dussehra.

On the day of Dussehra, by immersing the idols of the goddesses replaced in the first Navratra in water, the devotees engaged in the fast go to each other and offer sweets.

Every year, Ramlila is organized across the country. In which Lord Sri Ram is staged a battle with a ten-headed monster.

There are many beliefs about celebrating Dussehra or Vijayadashami

According to a legend, there was a big powerful demon named Mahishasura. He did the harsh penance of Brahma to become immortal. Brahma was happy with his penance and asked him to ask for a boon.

Then Mahishasura asked for the boon of immortality. On this, Brahmaji told him that the person who is born in this world has certain death, so he can ask whatever he wants except life and death. 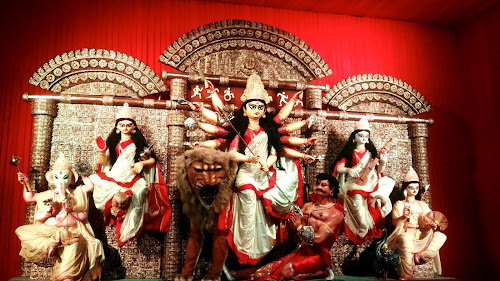 And he attacked the gods. The gods lost the battle and Mahishasura was ruled over Devaloka. To protect from Mahishasura, all the gods worshiped Adi Shakti with Lord Vishnu.

During this time, a divine light emerged from the body of all the gods, who took the form of Goddess Durga. Goddess Durga, armed with weapons, killed her on the 10th day after a fierce battle with Mahishasura for nine days.

Therefore, this day is celebrated as Vijayadashami. Due to the destruction of Mahishasura, Durga Maa became famous as Mahishasuramardini.

According to another legend, Lord Ram stayed in Lanka for nine consecutive days and fought with Ravana. Then on the 10th day, he killed Ravana with an arrow in his navel.

And it is also said that Lord Rama worshiped Mother Durga. The power was called. Taking the test of Ram, Mother Durga disappeared one of the lotus flowers kept for worship.

Ram was called Kamal Nayan. So they decided to offer one of their eyes to the mother. As soon as she started removing her eyes, the Goddess appeared in front of her and was pleased and gave a boon to win. Then on the day of Dussehra or Vijayadashami, Rama killed Ravana.