Ahmednagar District of Maharashtra State, India. There is a town under Tehsil. Which is known as Shirdi. And this holy place is very famous for Sai Baba, he has a huge temple here. Sai temple is one of the richest temples in the world.

Sai Baba considered an incarnation of God. Whom people of both Hindu and Muslim religions worship in the same spirit. He was an Indian religious teacher whom people worship globally. His followers considered him a fakir, saint, yogi, and satguru.

There are many contradictions about the birth of Sai Baba and his religion. Some believe him to be a Hindu, some a Muslim. At the moment he was a miraculous man who respected all religions. Which kept on chanting “the master of all” all his life. He kept calling for people of all religions to live together in a loving manner. At the same time, Hindu and Muslim continued to study both religions.

They wore Muslim hats. And he spent most of his life. Remained in a deserted mosque in Shirdi, Maharashtra. At the same time, the mosque that lived in him changed to the Hindu name Dardhakamai. In which people of both religions come to pay obeisance at the rate of Sai Baba. And worship them. And this original text written in Sri Sai Sachcharitra Marathi language has been translated into many languages. This book started writing in 1910 when Sai Baba was alive. And its writing lasted until the tomb of 1918. Sai Baba once told his devotee. That I was born in a Brahmin clan. And I was born in a stone village. But my mother handed me a fakir.

He raised in a fakir. Sai Baba reached Shirdi village in Ahmednagar district at the age of 16. Here he started living an ascetic life sitting on a pedestal under a neem tree.

When the villagers saw him, they amazed. Because he had never seen such a young man doing such austerity. People saw that Sai Baba is so absorbed in austerity. That he was not having any effect of cold, heat, and rain. Sai Baba lived under the same Neem tree for about 4 to 5 years and sometimes even used to go to the Shirdi forests for a long time. He used to live his life by begging the people of Shirdi.

The mosque where Sai Baba spent most time of his life is a holy place. Which lies in the premises. There are many small temples of Shiva, Ganesh, and Shani in the temple complex. The temple also has a museum, which displays the use of its personal writings. The current temple of Sai Baba is administered by the Shri Sai Baba Sansthan Trust of Ahmednagar district.

Several lines have been made for the devotees from the railings in the middle of the temple complex, in which the devotees stand waiting for Baba’s darshan. The temple complex has all the basic facilities like drinking water, a rest house, places to sit and relax. Many shops selling religious items, books, paintings, and food items are also present in the temple. 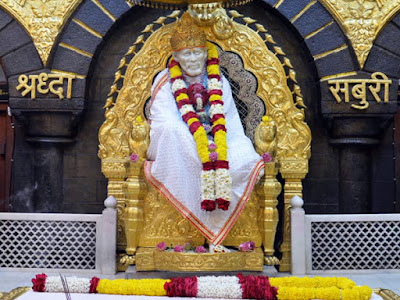 The Sai Darbar was decorated in Shirdi from 17 to 19 October 2018 to commemorate the completion of hundred years of Sai Baba’s samadhi. Baba took samadhi at Shirdi on 15 October 1918. More than 1 million devotees from 30 states and 20 countries attended the court. The Sai Baba temple registered as a trust in 1922 by Rubal Agarwal, CEO of Shirdi Sansthan.

The annual income of the trust at that time was around Rs 3200. Today the trust has an annual income of Rs 371 crore. In these three days, about one lakh devotees ate food in the kitchen here every day. One thousand servants served in three shifts to serve Bhajan. The entire temple complex was decorated with fruits and flowers costing Rs 35 lakh. Seven and a half tons of flowers were ordered for this.