And this mountain is part of the Himalayas. And earlier it is known as XV. The height of Mount Everest at that time was 29,002 feet or 8,840 meters. Then it is said in scientific surveys that its height is increasing by 2 cm every year. 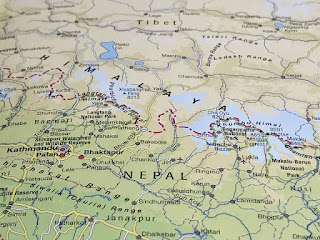 Mountains are made in four ways(Mount Everest )

1. As we all know, there are many layers of plates below our earth. And sometimes natural calamities also come. Like earthquake and due to which the earth’s plates are hit. Due to this, then this plate (tectonic plate) starts moving upwards. Which then takes the form of a mountain.

2. When one part of the land falls into the ground and the other part starts coming over the ground, it takes the form of a mountain.

3. Below the ground is lava whose temperature is millions of degrees. It naturally comes out of the ground as a volcano and along with cooling it sometimes takes the form of a mountain.

4. Naturally, big stones are broken. Then the same stone and its dirt get collected in one place. Then they gather on the mountain, then this stone takes the form of a mountain.

This was just a piece of information about the mountains which has been shared with all of you. Now we know about the highest mountain range in the world.

2. Mount Everest is the death zone after 4000 ft. The conditions there are very bad, due to which there is not much fear of breeding there.

3. Mount Everest is so cold. That almost all types of liquid freeze like water.

4. If someone dies on Mount Everest, then his body is put to the end. Because many people have died in the affair to bring back the dead body. Because climbing and descending Mount Everest is not an easy task.

5. On 1953 May 26, a mountaineer went with his group to climb Mount Everest. But he was back, after a few days. Because he was having trouble breathing after just 300 feet in height.

7. To climb Everest, the Government has also made many routes so that the lives of people are not endangered. And this route has been created by Tibet and Nepal.

8. Kami Rita Sherpa has made the record for climbing Mount Everest the most, he has climbed it many times.

9. There is also traffic jam on these routes.

11. From 500 to 400 km away from the peak of Mount Everest
Mountains are visible

12. From the top of Everest can be seen up to 1000 kilometers via telescope, which is not possible at all from the ground.

15. One can see the rocket of the Earth orbiting the Mount Everest.

Know About:-  Lord Shiva – The Story (History) of Lord Shiva