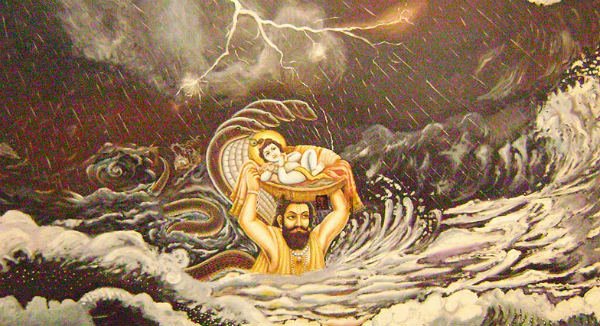 Krishna was born here to Devaki and her husband. In Chandravanshi Kshatriya Vasudeva. And In Dwaparyug. Bhojwanshi king Ugrasena, ruled in Mathura. He had a tyrant son Kans and Kans had a sister Devki.

Devki was married to Vasudev. And Kans had put his father in prison. Then he became the king of Mathura.

According to the mythological mention. The prophets told Kans at Devaki’s marriage that Kans’s slaughter by Devaki’s 8th son is certain. Hearing this Kans and imprisoned her sister and brother-in-law in Mathura prison.

And killed all the children of Devki one after the other. But Krishna was born at midnight. Then the prison doors opened automatically. And at that time all the soldiers were in sleep.

The chain in Vasudev’s hands also opened. And Yashoda, wife of Nand, resident of Gokul, was also going to have children. Vasudeva, leaving his son in the soup, left the prison.

And Yashoda, wife of Nand, resident of Gokul, was also going to have children. Vasudev goes there and changes the children. And they come and embarrass their daughter.

The daughter of Nanda, a follower of Puranas, was born to protect Krishna. Krishna, along with Nanda and his wife Yashoda, believe in Mathura of modern times as their son.

Many Indian texts state that in the legendary Kurukshetra war (Mahabharata). All the hundred sons of Gandhari die. Apparently on the first night before Duryodhana’s death, Krishna sent his condolences to Gandhari.

Gandhari accuses Krishna that Krishna did not deliberately end the war. She then curses them in anger and sorrow in that situation. That every person in their own “Yadu dynasty” would perish along with them.

In fact, according to the Mahabharata. A fight begins between the Yadav’s. in a festival in which everyone murders each other. And a few days later, considering a sleeping Krishna under a tree. Then a hunter named Jra shoots arrows as a deer. Which mortally injures them. But at the same time, Krishna forgives jra, and leaves the body. 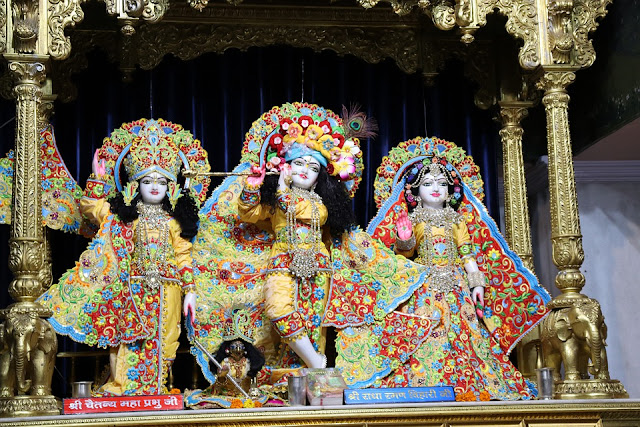 However, Lord Krishna’s First queen is Rukmini. And rukmini was the princess of Vidarbha country. And she Lord Krishna considered her husband in her heart. As a result Lord Krishna, while respecting Rukmani’s wish. And he did marriage with her.

According to the Puranas. Lord Krishna’s first wife was Rukmani. Which is especially the incarnation of Goddess Lakshmi. And Rukmini wanted to marry Lord Krishna. But Rukmi’s brother did not accept this marriage. So he had to run away and marry with Lord Krishna.

Lord Krishna represents many genres in Indian culture. Certainly his depiction is usually Vishnu. Such as is done color with black or blue skin.

However, ancient and medieval inscriptions, in India and Southeast Asia. And in stone sculptures have depicted them in the natural color from which it was made.

In some text. The skin of Lord Krishna is described as the color of Kambli.
Often peacock-winged flowers or crowns are worn to Krishna.

And he is often depicted playing the flute. In this form, one is usually depicted. And Putting one foot on the other in front of the other in a triangular pose. But sometimes he is accompanied by a cow or calf, which symbolizes the shepherd Govind.

In another depiction. Lord Krishna is a part of the battle scenes of the epic Mahabharata. He is shown as a charioteer in the Mahabharata. specially when he is addressing the Pandava prince Arjuna. Who symbolically recite the Bhagavad Gita, a scripture in Hinduism.

In these popular depictions, Krishna sometimes appears as a pioneer. Either as a visionary, sometimes as a chariot driver. An alternate depiction of Krishna shows him as a child (Bal Krishna).

A child is crawling on his hands and knees. And dancing, and stealing fellow friend Gwal Baal (butter thief). carrying sweet in his hand (Laddu Gopal). OR floating on the banyan leaf during the Holocaust.

A supernatural baby who seems to suck his toe. In regional variations are seen in Krishna’s statues and also in their various forms. Such as Jagannath in Odis ha, Vitthal or Vithoba in Maharashtra.

And Shrinathji in Rajasthan, and Dwarkadhish in Gujarat and Guruviruppan Avan in Kerala. They are depicted in other depictions along with Rad ha. Who is believed to symbolize the divine love of Rad ha and Krishna.

He is also shown in World form in Kurukshetra war. In which he has show many faces. and all the people are going in his mouth. He is also shown with his friend Sudama. Which is a symbol of true friendship.

Describe guidelines for Krishna icons and sculptures in architecture. The art of the Hindu temple is. Described in the medieval era. Such as Vaikhanas Ag-am, And Vishnu Dharmottara Purana, Brihat Samhita and Agni Purana.

Similarly. Early Tamil texts of the medieval era. Also include statues of Krishna and Rukmni. Many sculptures made according to these guidelines. Presentation in the collection of Government Museum, Chennai. There are several versions of Krishna’s life story. Three of which have been the most studied. Harivansh, Bhagavata, and Vishnu Purana.

These all reflect the original story. But their characteristics, details and styles vary greatly. The most original work, Harivansh, is described in a realistic style. Who describes Krishna’s life as a poor cowherd.

But poetic and supernatural is steeped in imagination. It does not end with the incarnation of Krishna ending. According to some descriptions, the fifth book of Vishnu Purana goes away from the realism of Harivansh. And covers Krishna in mystical words and columns. In many versions there are manuscripts of Vishnu Purana.

The tenth and eleventh books of the Bhagavata Purana. Are widely considered to be a poetical work. And full of imagination and metaphors. And there is no relation to the realism of organisms found in Harivansh.

Krishna’s life is presented as a cosmic drama. Where his father Dharmaguru Nanda was introduced as a king. The life of Krishna is close to that of a human being in Harivansh. But there is a symbolic universe in the Bhagavata Purana. Where Krishna is with in the universe. The Bhagavata Purana manuscripts are also present in several editions in several Indian languages.

A battle fought by Krishna [according to Mahabharata scripture] 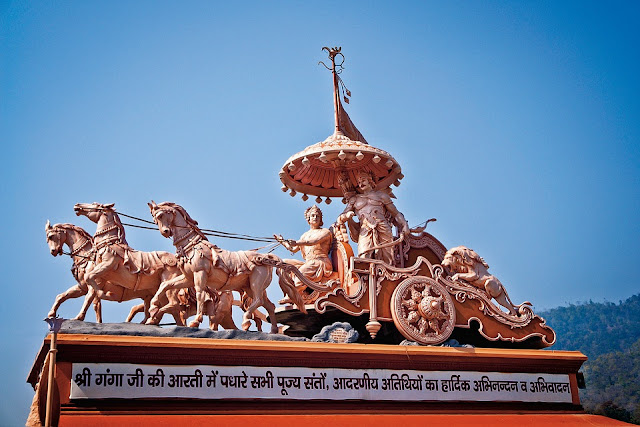 Krishna becomes Arjuna’s charioteer for Kurukshetra war, but on condition that he will not take any weapon. After both reached the battlefield. And then seeing that the enemy is a member of his own family. His grandfather, and his cousins ​​and loved ones.

Ar-jun is immersed in anger, and says. That his heart would not allow him to fight and kill his family. He is ready to relinquish the kingdom and leave his Gandiva (Arjuna’s bow).

Then Krishna enlightens Arjuna about the morality of life and the nature of impermanence. When one has to face the war between good and evil.

Then taking into account the stability of the situation, and the permanence of the soul and the distinction of good and bad. And carrying out duties and responsibilities. Such a war is necessary for the nature of real peace and for different types of yoga’s, and for the liberation of bliss within. And then the conversation between Krishna and Arjuna was presented in the form of a book called Bhagavad Gita.